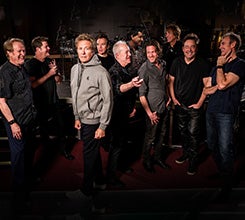 There are currently no tickets available for purchase; however, this may change closer to the show. Check back regularly for last minute availability.

Hailed as one of the "most important bands in music since the dawn of the rock and roll era" by former President Bill Clinton, the legendary rock and roll band with horns – Chicago – is the first American rock band to chart Top 40 albums in six consecutive decades. Chicago’s lifetime achievements include two Grammy® Awards, two American Music Awards, a star on the Hollywood Walk of Fame, and a Chicago street dedicated in their honor. Record sales top the 100 million mark, and include 21 Top 10 singles, five consecutive #1 albums, 11 #1 singles, and five gold singles. An incredible 25 of their 36 albums have been certified platinum, and the band has a total of 47 gold and platinum awards. Chicago has toured every year since the beginning. Four original band members still touring are Robert Lamm on keyboards and vocals, Lee Loughnane on trumpet and vocals, James Pankow on trombone, and Walt Parazaider on woodwinds. The band line-up also includes Wally Reyes, Jr. on drums, Keith Howland on guitar and vocals, Lou Pardini on keyboards and vocals, Ray Herrmann on sax and flute, Neil Donell on vocals, Brett Simons on bass, and Ramon "Ray" Yslas on percussion. With the signature sound of the Chicago horns, their iconic vocalists, and a few dozen ever-classic songs, their concerts are celebrations. 2019 marks the band’s 52nd consecutive year of touring – without missing a single concert date!