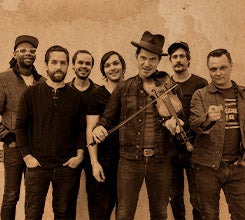 Important Information The Old Crow Medicine Show performance scheduled for Sunday, May 31, at the Peace Center has been rescheduled for Friday, January 22, 2021 at 8 pm. Tickets for the original performance will be honored for the newly scheduled date. Should you need to speak with a member of the Peace Center Box Office, please call 864.467.3000 during business hours, Monday – Friday, 10 am – 6 pm.

It’s been over 20 years since Old Crow Medicine Show’s humble beginnings as street buskers. The band has gone on to receive the honor of being inducted into the Grand Ole Opry, and has won two Grammy® Awards: Best Folk Album for Remedy (2014) and Best Long Form Music Video for “Big Easy Express” (2013). Additionally, their classic single “Wagon Wheel” received the RIAA’s double-platinum certification in 2019 for selling over 2 million copies, while the band’s debut album, O.C.M.S., has been certified gold (500,000 copies).