AQUILA THEATRE in Homer's The Odyssey 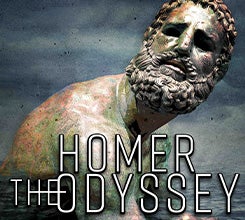 Homer’s The Odyssey is the epic tale of one man’s decade-long struggle to return home. One of the most famous tales in world literature, The Odyssey remains an influential and moving portrait of Odysseus’ monumental journey – one fraught with obstacles, dangers, and temptations. A testament to perseverance and the human spirit, The Odyssey was originally performed by highly skilled bards across the ancient Mediterranean world. Now, AQUILA THEATRE presents a thrilling new dramatic adaptation of this timeless poem.

Odysseus is the great strategic mind of the Greek army at Troy. He is at first reluctant to leave his wife Penelope and newborn son to go to battle, but his masterful tricks of deception help defeat the Trojans and end the ten-year-long war. His homecoming is just as long and treacherous as the war itself. As Odysseus sails across the seas, forced to confront a fantastical array of mythical creatures, sorcerers, monsters, and divine forces, he must use all his strength, skill, and intellect to survive. When he finally returns home to Ithaca, he comes disguised as a beggar. His own halls are plagued with gluttonous suitors determined to force Penelope to choose a new husband and king.

AQUILA THEATRE’s acclaimed adaptation of Homer’s Iliad: Book One was hailed by The New York Times as “thrillingly embodied.” In The Odyssey, Aquila applies its signature style of innovative storytelling and ensemble movement, bringing another of Homer’s classic poems to life.