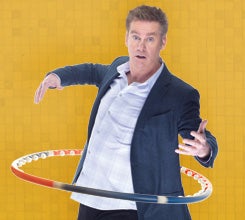 Fresh off of the November 2017 release of his first Netflix special, Brian Regan: Nunchucks and Flamethrowers, celebrated comedian Brian Regan comes to the Peace Center.

Setting a comedic standard of excellence that others continually try to follow, Brian Regan made history on September 26, 2015 with the critically-acclaimed live broadcast of Brian Regan: Live From Radio City Music Hall, the first live broadcast of a stand-up special in Comedy Central’s history. On May 8, 2015, Regan made his 28th and final stand-up performance on Late Show With David Letterman, the most of any comic since the show moved to CBS in 1993.

Regan is the unique comedian whose material is relatable to generations of fans and revered by comedians as the best in the business:

“He is one of my favorite, favorite stand-up comedians.” - Jerry Seinfeld

“Brian Regan is one of my favorite comedians ever. He is unbelievably funny.” - Jimmy Fallon

“One of the rare guys that is universally respected by comics as being one of the most hilarious guys out there at stand-up.” - Joe Rogan