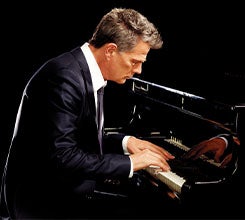 Foster says “It is with great sadness that I have to cancel my tour date in Greenville due to an unexpected medical procedure. I’m well on the road to recovery but my doctors are insisting I spend the next several weeks recovering. I love touring and performing to my fans, so this is not an easy decision. However, we will do our best to reschedule the date in the future.”

Few individuals can claim to have their fingerprints on more major moments in popular music than David Foster. Foster has created hit songs and award-winning gold and platinum albums for a diverse array of artists, including Barbra Streisand, Celine Dion, Whitney Houston, Michael Jackson, and Madonna. He has escorted singers who have straddled both pop and classical styles like Andrea Bocelli and Josh Groban into the mainstream. Foster has created culture-defining soundtracks for blockbuster films like The Bodyguard, Urban Cowboy, and St. Elmo’s Fire; and crafted timeless holiday classics, including perennial best-sellers like Josh Groban’s Noel, Michael Bublé’s Christmas, Celine Dion’s These Are Special Times, Rod Stewart’s Merry Christmas Baby, Andrea Bocelli’s My Christmas, and Mary J. Blige’s A Mary Christmas. For his remarkable work, Foster has won 16 Grammy® Awards, an Emmy® Award, a Golden Globe®, and racked up three Oscar® nominations for Best Original Song. Foster has also been rewarded with professional honors, including induction into the Canadian Walk of Fame in 2002, The Canadian Music Hall of Fame in 2007, The Canadian Songwriters Hall of Fame in 2010, and the Songwriters Hall of Fame in the US in 2010. In 2013, Foster received a star on The Hollywood Walk of Fame.