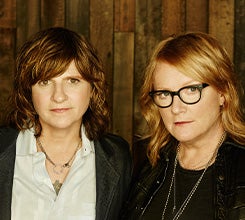 Grammy®-winning duo Amy Ray and Emily Saliers are Indigo Girls. The power of unity has been an Indigo Girls calling card ever since they burst into the spotlight with their 1989 self-titled breakout album. Since then, the band has recorded 14 studio albums, racked up a slew of gold and platinum certifications, and spent decades touring. Their catalog contains contemporary classic songs like “Galileo,” “Closer To Fine,” “Get out the Map,” and “Least Complicated.” They are the only duo with Top 40 titles on the Billboard 200 in the 1980s, 1990s, 2000s, and 2010s. NPR’s Mountain Stage called the group “one of the finest folk duos of all time.” Rolling Stone said they are “ideal duet partners. Their voices soar and swoop as one, alternately raucous and soothing. When they sing together, they radiate a sense of shared purpose that adds muscle to their lanky, deeply-felt folk-tinged pop songs.” The New York Timesraved that “gleeful profanities, righteous protest anthems, and impeccable folk songwriting have carried this duo for thirty years.” The band’s stunning new album, Indigo Girls Live with The University of Colorado Symphony Orchestra, features richly cinematic, larger-than-life arrangements of their songs, performed by a 64-piece orchestra.