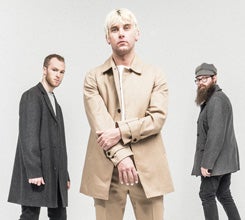 Due to inclement weather, the Judah & the Lion performance scheduled for tonight at 8 PM on the TD Stage has been relocated to the Peace Concert Hall.

The members of Judah & the Lion – Judah Akers (vocalist), Brian Macdonald (mandolin) and Nate Zuercher (banjo) – combine the twang of folk, the beat of hip-hop, the drive of rock & roll and the punch of pop to create their own unique sound.   In 2016, iHeartRadio named them an Artist on the Verge, and in 2018 the band claimed the title of iHeartRadio’s Best New Rock/Alternative Artist. Their single “Take It All Back” climbed the ranks on alternative radio, eventually spending three weeks in the No. 1 spot before becoming certified gold.   The band's debut record, Kids These Days, climbed to No. 4 on the Billboard Folk Chart and No. 2 on the genre-wide Heatseekers chart after its release in September 2014. Their latest release, Folk Hop N Roll, casts a wide net from the earthy stomp of roots music to the bold bounce of hip-hop, proof that Judah & the Lion — who are now four releases into their career — have developed quite the roar.