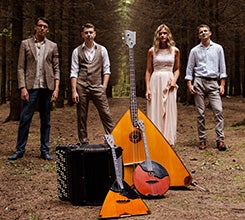 Important Information The Peace Interlude scheduled for Wednesday, April 1, at the Peace Center has been cancelled.

Russian Renaissance will not be present at the Interlude

Steeped in Russia’s rich musical heritage, Peace Center Artist-in-Residence Igor Begelman brings a uniquely personal perspective to traditional Russian music and instruments. Russian folk music, along with that of many other regions, is a largely oral tradition with a strong connection to life-cycle rituals, enculturation, work, and games. While form and function of folk music across various cultures are similar, the array of instrumentation and ornamentation is vast – including instruments from balalaikas to bagpipes. Join Begelman on a cultural adventure, and explore the development and continuing influence of traditional folk music.

Did you know?
Traditional folk music has played a significant role in uniting groups of people during times of cultural strife, social reform, and political movements. African American work songs, nationalist melodies of Chopin’s mazurkas, and American protest music of the 1930s are still sung and continue to influence modern musical tradition today.

Unwind, meet up, and connect with your musical community! Interludes are FREE music appreciation gatherings led by Peace Center Artist-in-Residence Igor Begelman. Each interlude pairs a musical facet of an upcoming Peace Center performance with a featured beverage for a multi-sensory sip, listen, and learn experience. Featured drinks are available for purchase.