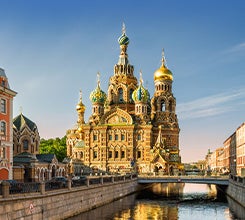 In 1904, Prokofiev was introduced to Glazunov, a professor at the renowned Saint Petersburg Conservatory. Prokofiev later enrolled at the school. For Begelman, Glazunov and Prokofiev were the giants he looked up to in his own musical studies in the Soviet Union. Join Begelman on an expedition to the past as he explores and deconstructs the rise of great Russian music through the works of these two prolific geniuses.