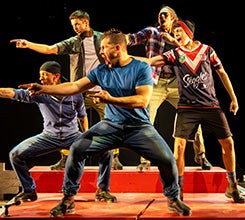 “Tap dancing will never be the same.” (The Times)   This is not just tap. Experience high voltage, rugged, raw talent in the tap dance phenomenon that has taken the world by storm. Dein Perry's Tap Dogs takes the stage with its “positively electrifying” (The New York Observer) trademark blend of live music and tap dance like you've never seen before.   “Part theatre, part dance, part rock concert, and part construction site” (BBC), the show is crammed with high-energy dance, theatrical performance, and live music. Whether in water, upside-down, or jumping through scaffolding, the Tap Dogs have been performing to the beat of their own drum for over 20 years.   Winner of over 15 international awards including an Olivier Award and an Obie Award, this global musical smash hit has appeared in more than 330 cities on six continents and has been seen live by over 12 million people. A worldwide television audience of more than 3.4 billion saw 1,000 Tap Dogs performing in the Opening Ceremony of the Sydney Olympics.