Tom Segura: Take It Down Tour 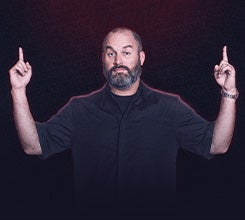 Tom Segura has become one of the top comedy acts in the country. He is best known for his three Netflix specials, Disgraceful (2018), Mostly Stories (2016), and Completely Normal (2014). His hit podcast Your Mom’s House, which he co-hosts with his wife, comedian Christina Pazsitzky, was a finalist for Best Comedy Podcast at the Stitcher Awards and profiled by VICE. Paste Magazine described Segura as, “...having a natural and capable storytelling ability, one that lifts his narratives out of average anecdote fare and plants them firmly in hilarious ground.” Segura can be seen in the Paramount feature Instant Family, opposite Mark Wahlberg and Rose Byrne. His television credits include The Late Show with Stephen Colbert, Conan, Workaholics, Happy Endings, The Late Late Show, Comedy Central Presents: Tom Segura, Mash Up, and How To Be A Grown Up. Segura also continues to perform at the top comedy festivals in the world, including Montreal’s Just For Laughs Comedy Festival, The Melbourne International Comedy Festival, The Comedy Festival - Las Vegas, The South Beach Comedy Festival, and The Hong Kong Comedy Festival.

NO USAGE OF CELL PHONE/CAMERAS DURING SHOW: Once the show starts, anyone who is caught with his or her cell phone out will be ejected without refund. NO warnings will be given during the performance!