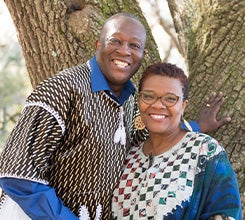 Dream Weaving: Gullah Stories and Songs is a spellbinding presentation about the customs, beliefs, folkways, language, and heritage of the Gullah people and culture. Created and performed by Ron and Natalie Daise, the production intricately blends stories and songs of the Gullah people with humor, harmony, and humanity. As impeccable as an artistically sewn sweetgrass basket, which mirrors traditions from yesteryear to today, Dream Weaving offers a perspective and energy that is captivating and treasured.

From 1994-1998, Ron and Natalie Daise starred in Nick Jr. TV's award-winning Gullah Gullah Island, for which they also served as cultural consultants. The show was cited by TV Guide as one of the "10 best children's shows" in 1996. During its production it was viewed daily by over three million children and their families in the United States and was broadcast in 15 countries around the world.

They received the 1996 South Carolina Order of the Palmetto, the state's highest civilian honor, and the 1997 State of South Carolina Folk Heritage Award, given for lifetime achievement and excellence in folk art that has enriched the lives of the people in their community and state.