An Evening with Gillian Welch 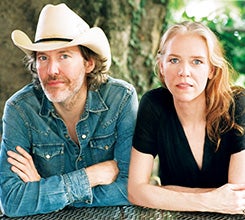 Gillian Welch’s 2011 album, The Harrow & The Harvest, was nominated for a Grammy® Award for Best Engineered Album (Non Classical) and Best Folk Album. It was highly praised by critics worldwide, including Uncut magazine, who called The Harrow & The Harvest a "timeless country classic." NPR Music proclaimed that the album “grabs the attention of a new generation” and The AV Club said, “Welch and longtime partner David Rawlings are flawless.”   The Americana singer will be joined by her frequent collaborator, David Rawlings, for an evening that is “at once innovative and obliquely reminiscent of past rural forms” (The New Yorker). Welch and Rawlings have recorded 8 studio albums and have lent their talents to countless fellow artists’ recordings. Their latest collaboration, Rawlings’ Poor David ’ s Almanack, was released this past summer.