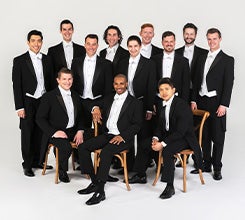 Called “the world’s reigning male chorus” by The New Yorker, the San Francisco based Grammy® Award-winning ensemble Chanticleer embarks on its 42nd season in 2019-2020. Praised by the San Francisco Chronicle for its “tonal luxuriance and crisply etched clarity,” Chanticleer is known for its seamless blend of 12 male voices ranging from soprano to bass, and its original interpretations of vocal literature, from Renaissance to jazz and popular genres, as well as contemporary composition.

Since Chanticleer began releasing recordings in 1981, this orchestra of voices has sold over a million albums and won two Grammy Awards. The group’s most recent studio recording, Then and There, Here and Now, was released for its 40th anniversary in 2018.

Named for the “clear-singing” rooster in Geoffrey Chaucer’s Canterbury Tales, Chanticleer first became known for its interpretations of Renaissance music, and was later a pioneer in the revival of the South American baroque, recording several award-winning titles in that repertoire. Chanticleer was named Ensemble of the Year by Musical America in 2008, and was inducted into the American Classical Music Hall of Fame the same year.

Program
Celebrating ocean voyaging and exotic climates, Trade Winds will include the premiere of composer Zhou Tian’s new work based on John Masefield’s poem “Trade Winds.” It will also feature Portuguese music new to the ensemble, songs from the Asia-Pacific region, and early music by Monteverdi, Gesualdo, and Penalosa.

Unwind, meet up, and connect with your musical community in our FREE Peace Interlude Musical Happy Hour on October 10.

Ticket holders may observe a master class with Chanticleer's Music Director, Fred Scott, for free. To inquire about becoming a participant in the master class, email [email protected].