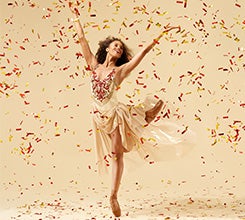 A singular presence in the ballet world, Dance Theatre of Harlem tours internationally, presenting a powerful vision for ballet in the 21st century. The multi-ethnic company performs a forward-thinking repertoire that includes treasured classics and neoclassical works by George Balanchine and resident choreographer Robert Garland, as well as innovative contemporary works that use the language of ballet to celebrate African American culture.   Founded in 1969 by Arthur Mitchell and Karel Shook as an affirmation of the power of art to transform, the Dance Theatre of Harlem company — comprised at that time of African American artists barred from US ballet companies because of the color of their skin — became an expression of human excellence that broke down barriers and inspired millions.   Program (subject to change):    Valse Fantaisie  (George Balanchine): When George Balanchine created this version of Valse Fantaisie to Mikhail Glinka’s music of the same name, he employed his signature musicality, fleetness, and brilliance. Valse Fantaisie is performed by five women and one man who capture the music’s joyful spirit in this gem of neo classicism.   This Bitter Earth (Christopher Wheeldon): Choreographer Christopher Wheeldon’s sublime pas de deux This Bitter Earth is set to a mashup of Max Richter’s minimalist “On the Nature of Daylight” and Dinah Washington’s soulful rendition of the 1960s rhythm and blues hit “This Bitter Earth.” The resulting brief encounter between a man and a woman leads one to believe that “…this bitter earth may not be so bitter after all.”   Return  (Robert Garland): A rousing blend of the elegance of classical ballet and the gritty drive of funk, Return is set to Aretha Franklin and James Brown to push the boundaries of pointe work and social dance alike.

Change (Dianne McIntyre): This work is inspired by women – Black, Brown, and Beige – who have refashioned the neighborhood, the country, and the world through their vision, courage, and endurance. Often unsung, inconspicuous, or up-front, these individuals could be called warriors for change.

Ticket holders may participate in the workshops with Dance Theatre of Harlem. Contact [email protected] or the Box Office at 864.467.3000 to learn more.

Dancing in the Streets

Everyone is a dancer when Dance Theatre of Harlem brings dancing to the streets to kick-off Artisphere weekend! Join us on Graham Plaza as two dancers demo and lead you through easy to learn steps that prove anyone can dance.

Open to ticket holders, this FREE 30 minute pre-show talk takes an inside look at Dance Theatre of Harlem with the company's artistic director, Virginia Johnson, and is hosted by Peace Center Artist-in-Residence, Igor Begelman.