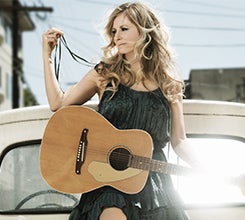 Singer, songwriter, and producer Deana Carter’s multi-platinum debut album, Did I Shave My Legs For This?, was released in late summer of 1996. By the end of the year, it had climbed to the top of both the country and pop charts. Anchored by the Grammy®-nominated hit “Strawberry Wine,” the album showcased Carter’s own blend of country and retro-rock sprinkled with the folksy singer/songwriter qualities that have garnered her well-deserved respect and wild acclaim.

In the following years, she released several more albums, including a Greatest Hits compilation, and toured with the likes of Willie Nelson, Kenny Chesney and Bob Dylan.

Carter’s latest release, Southern Way of Life, is instinctively autobiographical, mimicking the interesting ride of her own life. The songs weave through the sometimes rocky terrain of adulthood, including loss of love, relationships, trials, tribulations and simply put - life.

Special Guest
Sweet Tea Trio has been winning hearts with a unique sound unlike anything heard on country radio today. Their self-titled debut EP was released in early June, the day before they performed at the CMA Awards in Nashville. Sweet Tea continued to gain momentum, opening for Bon Jovi and sharing the stage with county stars like Lonestar, Tracy Lawrence and Diamond Rio.