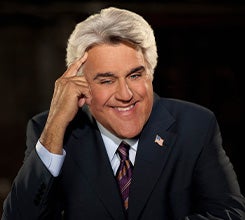 Important Information The Jay Leno performance scheduled for Friday, March 20, at the Peace Center has been postponed. The Peace Center is working to reschedule the event, and a new date will be announced as soon as possible. Ticketholders will be contacted when details become available. Visit peacecenter.org/covid-19-info for more information.