John Lennon, the Mobster, & the Lawyer 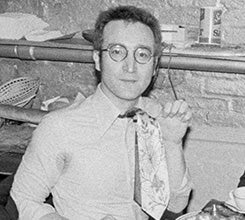 Saluda, NC, resident Jay Bergen was a New York trial lawyer for 45 years. He represented John Lennon, most notably in his protracted court battle with Morris Levy, a notorious Mafia front-man working in the New York City music industry in the 1970s. Over the course of the trial, Lennon and Bergen became friends. In this intimate evening of storytelling, Bergen will surprise and delight with personal anecdotes about the times he spent with Lennon, Yoko Ono, and other rock and roll royalty. This multimedia event is for anyone who is a fan of John Lennon, The Beatles, and their revolutionary impact on pop music.

“When we got into John and Yoko’s limo at the lunch break on the first day of the trial — January 12, 1976 — I asked them what they wanted for lunch.  John said, ‘We’re only eating fish.’ I told the driver to take us to the Fulton Fish Market. We stopped in front of Sloppy Louie’s, one of many landmark spots in that area. It was not fancy but served excellent seafood. John and Yoko loved it, so we ate there every day for the 11 days they attended the trial!” - Jay Bergen

The evening is directed by Catherine Gillet.