Postponed - John Pizzarelli & Catherine Russell: A Tribute to Nat King Cole and the Ladies of Song 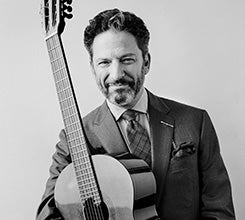 Important Information The John Pizzarelli & Catherine Russell: A Tribute to Nat King Cole and the Ladies of Song concert scheduled for Thursday, March 19, at the Peace Center has been postponed. The Peace Center is working to reschedule the event, and a new date will be announced as soon as possible. Ticketholders will be contacted when details become available. Visit peacecenter.org/covid-19-info for more information.

World-renowned guitarist and singer Pizzarelli has established himself as a prime contemporary interpreter of the Great American Songbook and beyond, with a repertoire that includes Joni Mitchell, Neil Young, Tom Waits, Antônio Carlos Jobim, and The Beatles. He has been hailed by The Boston Globe for “reinvigorating the Great American Songbook and re-popularizing jazz.” The Toronto Star pegged him as “the genial genius of the guitar.” And The Seattle Times saluted him as “a rare entertainer of the old school.” Russell dazzles audiences with familiar favorites and forgotten treasures alike. Performing as a backup singer, multi-instrumentalist, and lead singer before launching her solo recording career, she has appeared on over 200 albums. In 2012, she received a Grammy® Award as a featured artist on the soundtrack of the HBO series Boardwalk Empire. With “a voice that wails like a horn and whispers like a snake in the Garden of Eden” (NPR), “she virtually stands alone on today’s jazz landscape” (Los Angeles Times).