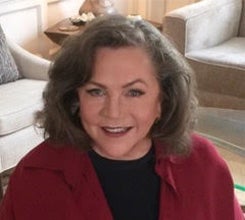 Finding My Voice takes audiences on a remarkable behind-the-scenes journey of Kathleen Turner’s extensive and well-documented career. Peppered with songs from the great American songbook, Turner croons hits including “Let’s Fall in Love,” “I’d Rather Be Sailing,” “On the Street Where You Live,” and “Every Time We Say Goodbye,” showcasing her trademark husky voice. Turner supplied the voice of temptress Jessica Rabbit in the film Who Framed Roger Rabbit. She was nominated for Tony Awards® in 1990 for playing Maggie in Cat on a Hot Tin Roof and in 2005 for her performance as Martha in Who’s Afraid of Virginia Woolf? opposite Bill Irwin. She has toured as Texas-based political columnist Molly Ivins in Red Hot Patriot: The Kick-Ass Wit of Molly Ivins, and starred in Joan Didion’s solo drama, The Year of Magical Thinking, at Arena Stage in Washington, D.C. Turner’s movies include Romancing the Stone and Prizzi’s Honor, each of which earned her a Golden Globe® Award; Peggy Sue Got Married, which brought both Academy Award® and Golden Globe nominations; and Body Heat and War of the Roses, both of which earned her further Golden Globe nominations. A once-in-a-lifetime chance to see a true Hollywood legend on stage, Finding My Voice is a deeply personal cabaret show packed with humor, great music, and one-of-a-kind insights spanning Turner’s exciting career.