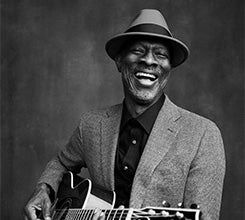 Over the past two decades, Keb' Mo' has cultivated a reputation as a modern master of American roots music. It all took off for Keb' Mo' in 1994 with his self-titled release, and over the years, he has proven that he is a musical force that defies typical genre labels. Album after album, 14 in total, garnered him four Grammy® Awards and 11 nominations. Mo' has also been awarded 11 Blues Foundation Awards and six BMI Awards for his work in TV and film. He created "Martha's Theme" for the TV show Martha Stewart Living, wrote and performed the theme song for the hit sitcom Mike & Molly, and was the music composer for TNT's Memphis Beat. In 2017, Keb' Mo' released TajMo, a collaborative album with the legendary Taj Mahal, which earned a Grammy Award for Best Contemporary Blues Album. His list of artist collaborations comprises a who's who in the music industry and includes Bonnie Raitt, Vince Gill, Amy Grant, Jackson Browne, Natalie Cole, Lyle Lovett, India Arie, James Cotton, Bobby Rush, Timothy B. Schmit, Marcus Miller, and many more. His songs have been recorded by B.B. King, Buddy Guy, the Dixie Chicks, Joe Cocker, Robert Palmer, Tom Jones, Melissa Manchester, Solomon Burke, and the Zac Brown Band, to name a few. His guitar playing has even inspired leading instrument maker Gibson Brands to issue the Keb' Mo' Signature Bluesmaster and Bluesmaster Royale acoustic guitars and Martin Guitars to issue the HD-28KM Keb' Mo' Limited Edition Signature model. Opening Act: Jontavious Willis  Every generation or so, a young bluesman bursts onto the scene and sends a jolt through the blues community; Jontavious Willis has that effect on people. The 22-year-old rising multi-instrumentalist will release Spectacular Class in April. The album features dynamic vocals and all types of blues: Delta, Piedmont, Texas, and Gospel. His stand-out fingerpicking, flat-picking, and slide prowess will also be on display. Living legend Taj Mahal has described him as the “Wonderboy” and “the Wunderkind.” In 2015, Mahal asked Willis to play on stage with him, and he opened select shows along the TajMo tour.