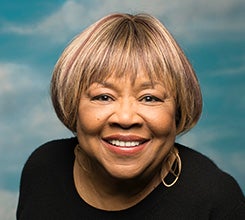 with special guest The Broadcast

Grammy® Award winner and Kennedy Center Honoree Mavis Staples is living, breathing history. She made a name for herself in the 1950s as part of The Staple Singers, went on to contribute to the freedom songs of the Civil Rights era, and later rose to pop radio stardom with hits like “I’ll Take You There” and “Respect Yourself.”

At the beginning of her eighth decade of singing truth, Staples has delivered If All I Was Was Black. The album represents Staples' third collaboration with songwriter and producer (and Wilco frontman) Jeff Tweedy. Their first partnership in 2010, You Are Not Alone, won a Grammy Award for Best Americana album. Their second effort together, One True Vine, was a Grammy nominee. But If All I Was Was Black marks the first time Tweedy has composed an entire album of original songs for Staples' legendary voice.

With her trademark deep growl more powerful than ever, Staples shouts, croons, scats, swoops, and testifies like no one else can.