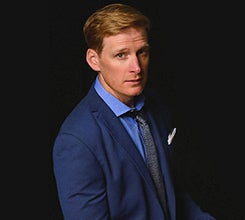 South Carolina native and singer-songwriter Patrick Davis returns to the Peace Center, and this time he’s bringing His Midnight Choir with him! Davis has released four well-received, full-length albums and toured the U.S. and Europe as both a headliner and support act for Darius Rucker, Jewel, and others. As a songwriter, he’s had over 50 songs recorded by artists such as Jimmy Buffet, Lady Antebellum, Imelda May, Darius Rucker, Jewel, Robert Randolph, and Guy Clark. Borrowing its name from a line in Leonard Cohen’s “Bird On a Wire,” His Midnight Choir is an 11-piece band featuring horns and background singers. Since the very first time playing dates together, Patrick Davis & His Midnight Choir have witnessed growing congregations across the Southeast and beyond.