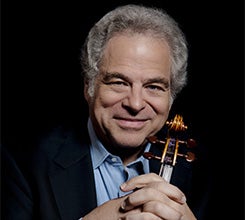 Undeniably the reigning virtuoso of the violin, Itzhak Perlman enjoys superstar status rarely afforded a classical musician. Beloved for his charm and humanity as well as his talent, he is treasured by audiences throughout the world for his remarkable artistry and irrepressible joy for making music. Perlman’s recordings have garnered 16 Grammy® Awards and regularly appear on the best-seller charts. In 2008, Perlman was honored with a Grammy Lifetime Achievement Award for excellence in the recording arts. A major presence in the performing arts on television, Perlman has been honored with four Emmy® Awards, most recently for the PBS documentary Fiddling for the Future, a film about his work as a teacher and conductor for the Perlman Music Program. One of his proudest achievements is his collaboration with film composer John Williams in Steven Spielberg’s Academy Award®-winning film Schindler’s List, in which he performed the violin solos. Perlman was awarded a Presidential Medal of Freedom, the nation’s highest civilian honor, in November 2015 by President Obama for his meritorious contributions to cultural endeavors of the United States and for being a powerful advocate for people with disabilities. In 2003, he was granted a Kennedy Center Honor by The John F. Kennedy Center for the Performing Arts in celebration of his distinguished achievements and contributions to the cultural and educational life of the United States. President Clinton awarded him the National Medal of Arts in 2000, and President Reagan honored him with a Medal of Liberty in 1986.

Come learn about some of the violin greats of the past and present, including Itzhak Perlman, Jascha Heifetz, Midori, Fritz Kreisler, and Hilary Hahn in our FREE Peace Interlude Musical Happy Hour on February 27.