No Events Today
View All Events
Close
Read Up, Greenville 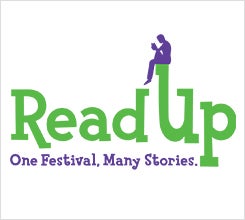 Read Up, Greenville is a celebration of Young Adult and Middle Grades books and authors. There will be book sales, author signings, panel discussions, interactive experiences, and keynote speakers. The day will feature eleven panels specific to different themes as well as a makerspace.

The event is 9:30 am - 6:30 pm and is free to all. However, keynote presentations will require a ticket due to the high volume of attendees anticipated.

Events that require a reservation ticket include:

October 20 at 9:30 am in the Gunter Theatre with book signing opportunity immediately following.

Ally Condie is the author of the MATCHED Trilogy, a #1 New York Times and international bestseller. MATCHED was chosen as one of YALSA’s 2011 Teens’ Top Ten and named as one of Publisher’s Weekly’s Best Children’s Books of 2010. The sequels, CROSSED and REACHED, were also critically acclaimed and received starred reviews, and all three books are available in 30+ languages. Ally is also the founder of the non-profit, WriteOut Foundation, which runs writeoutcamp.org, a writing camp for teens.

Brendan Reichs was born and raised in Charlotte, North Carolina. After three long years working as a litigation attorney, he abandoned the trade to co-write the VIRALS series with his mother, the great Kathy Reichs. After completion, he began his new YA series: Project Nemesis. The first book, NEMESIS, was an instant New York Times bestseller and received starred reviews from Kirkus and Booklist. It’s sequel, GENESIS, released in March 2018, also received a starred review from Kirkus. The final volume, CHRYSALIS, will release March 5, 2019.

On October 2, 2018, best friends, Ally and Brendan, release the first volume in a fantastically fun new middle grade series. THE DARKDEEP is a cross between The Goonies and Stranger Things that all ages will enjoy. The second book will release in Fall 2019.

October 20 at 5:00 pm in the Gunter Theatre with book signing opportunity immediately following.

Marissa Meyer is the #1 New York Times bestselling author of HEARTLESS and THE LUNAR CHRONICLES. She lives in Tacoma, Washington, with her husband and twin daughters. She’s a fan of most things geeky (Sailor Moon, Firefly, any occasion that requires a costume) and has been in love with fairy tales since she was a child. She may or may not be a cyborg.

ARCHENEMIES, he latest book in the RENEGADES series will be available on November 6th.