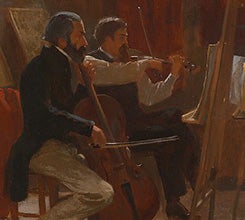 Peace Interludes are FREE music appreciation gatherings that unpack the rich traditions and diverse styles of great composers. Each month will feature a unique composer and drink pairing, providing a multi-sensory sip, listen, and learn experience that highlights a musical period.

Be whisked away to Paris, the city of lights and love, as you explore the Romantic period. Working during the Industrial Revolution, artists began to turn inward, focusing on reflective forms, while others used self-portraits or autobiographies. Hector Berlioz’s symphonic score, Symphonie Fantastique, and Caspar David Freidrich’s painting, Wanderer above the Sea of Fog are exemplary Romantic works that transport us into the artists’ aesthetic and emotional imaginations. No “classical” rules apply at this Peace Interlude!

Born in 1810, Polish composer Frédéric Chopin only gave 30 public performances of his preludes, nocturnes, and waltzes. Composing and writing poetry at the age of six, he gave his first public concerto performance at age eight. Chopin was very fond of Bach (who could blame him) and urged his piano pupils to practice Bach every day to strengthen their fingers and exercise their minds with the mathematical music.

Made exclusively in the Champagne region of France, champagne (according to one myth) was originally created by a monk in the 17th century. Researchers have found that there are approximately one million bubbles in the average champagne glass.