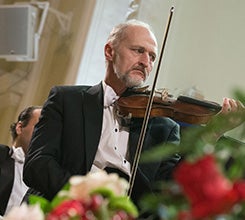 "They played with such captivating beauty that the audience gave an involuntary sigh of pleasure." (Evening Standard)

Widely recognized as one of the world’s top orchestras, the Russian National Orchestra was founded in 1990 by pianist and conductor Mikhail Pletnev. The ensemble has been described as "a living symbol of the best in Russian art" (Miami Herald), "as close to perfect as one could hope for" (Trinity Mirror), and "astoundingly virtuosic" (Glasgow Herald).

The orchestra’s recording of Sleeping Beauty, conducted by Pletnev, is among the most listened to classical music recordings of the last 75 years, according to the BBC. Their recording of Prokofiev's Peter and the Wolf and Beintus's Wolf Tracks, conducted by Kent Nagano and narrated by Sophia Loren, Bill Clinton, and Mikhail Gorbachev, received a 2004 Grammy® Award, making them the first Russian orchestra to win the recording industry's highest honor. In 2008, Gramophone magazine included them in its list of the world’s 20 best orchestras.

Ticket holders may observe the Solo Piano Master Class with George Li. Contact the Box Office at 864.467.3000 to hold your seat.

Hold a table at Genevieve's Theater Lounge at the Peace Center, opening at 4:30 pm. Click here to see a sample menu and make a reservation.