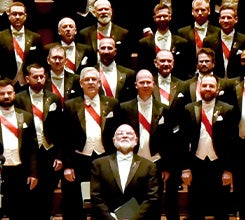 For more than 40 years, the San Francisco Gay Men’s Chorus (SFGMC) has served as an international standard bearer for a powerful mix of extraordinary musical excellence and mission-driven activism. Founded in 1978, it was the first choral organization to courageously proclaim its orientation in its name and is credited with helping start the LGBTQ choral movement that now spans the entire globe, galvanizing and changing the course of LGBTQ history. The chorus continues to inspire other arts-based community organizations through its performances and involvement in human rights, community activism, empowerment, and inclusiveness, establishing it as an icon among LGBTQ organizations.

Under the leadership of Artistic Director Dr. Timothy Seelig, SFGMC has established a heightened level of performance standards, bringing renewed audience and choral industry acclaim. Recent touring schedules, recordings, and outreach programs have broadened its impact and reputation in the community while maintaining its signature blend of humor, personality, and ground-breaking performances. In 2019, SFGMC acquired a new facility that has become its permanent home for rehearsals and offices. The building serves as the first-ever National LGBTQ Center for the Arts and a community space for San Francisco LGBTQ artists.

The SFGMC will be joined by the Greenville Gay Men's Chorus for the final two songs.