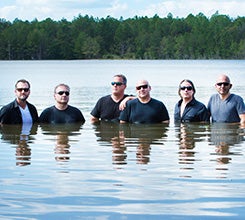 Originating from Gainesville, FL, Sister Hazel is an alternative rock band comprised of five gifted, seasoned musicians whose well-spring of natural talent led Performing Songwriter Magazine to call them "one of the Top 100 Most Influential Independent Performers of the last 15 years."   Their song "All for You" topped the adult alternative charts during the summer of 1997, and the success propelled their album to platinum status. In their first showing on the country music charts, they made a strong debut with Lighter in the Dark at No. 4 on Billboard’s Top Country Albums chart and No. 6 on Billboard’s Independent Albums chart. The band landed on Billboard’s Top Country Albums Chart again in 2018 with Water at No. 4.