An Evening with The SteelDrivers 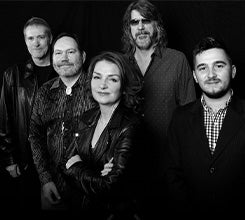 “Gutsy, gritty bluegrass songs.” - The Tennessean  “You can call it power-bluegrass or country soul, but whatever you call it, Nashville’s SteelDrivers have bushels of it.” - The Philadelphia Inquirer  The SteelDrivers are a Grammy® Award-winning band from Nashville, TN, braiding bluegrass roots with new threads of country, soul, and other contemporary influences to create an unapologetic hybrid that is old as the hills but fresh as the morning dew. “Blue Side of the Mountain,” from their self-titled debut album garnered their first Grammy nomination in the Best Country Performance category. Their sophomore album, Reckless, received two nominations, one for Best Bluegrass Album and another for Best Country Performance for “Where Rainbows Never Die.” The band’s third album, Hammer Down, subsequently climbed all the way up to number one on the Billboard Bluegrass charts. The highly-acclaimed fourth album, The Muscle Shoals Recording, garnered the group that long elusive Grammy win for Best Bluegrass Album. The SteelDrivers’ brand of bluegrass – intense, dark, poetic, and inescapably human – is a refreshing reminder of the timeless power of string band music.