Stories I Can't Tell in Church 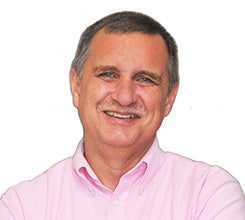 Jim Dant has made waves in South Carolina as pastor of Greenville’s ‘100% Inclusive’ First Baptist Church – the only church to serve as a tour venue for the San Francisco Gay Men’s Chorus ‘2017 Lavender Pen Tour.’  He’s made waves nationally with the publication and explosive sales of his latest book ‘This I Know: A Simple Biblical Defense of LGBTQ Christians.’  He’s received thousands of threats, taunts and damning messages in the last year…but he’s still smiling! You will be smiling too as he shares the hilarious content of some of these correspondences, as well as, his personal responses to ignorance and hate.

Jim’s simple (but not simplistic) theological savvy, his deep love for all people and his boundless bawdy humor will have you rolling in the aisle…and…rolling up your sleeves to make a difference in the world.

You will laugh. You will cry. You will be glad you spent an evening at Gunter Theatre.