Thank You For Coming – Film Screening 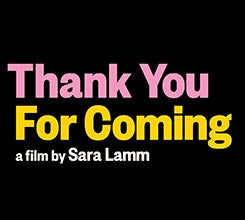 Documentary filmmaker Sara Lamm discovered as an adult that she was conceived via sperm donor. It’s taken 11 years, 12 DNA tests, five ancestry databases, one potential half sister, and 900 sixth cousins to (maybe) find her biological father. Thank You For Coming is a genealogical detective story and a funny, bittersweet meditation on love, loss, friendship, and family. Thank You For Coming premiered at the Los Angeles Film Festival, screened at DOC NYC, and was broadcast widely on PBS. Lamm also co-directed Birth Story: Ina May Gaskin and the Farm Midwives, which won the Audience Award at the 2012 Los Angeles Film Festival, was released theatrically in the US, and screened in community and academic venues all over the world (including at the McMurdo Station in Antarctica). Her 2007 film Dr. Bronner’s Magic Soapbox was also released theatrically and had its television premiere on the Sundance Channel. In addition, her work has appeared at the Massachusetts Museum of Contemporary Art, The American Visionary Art Museum, and on NPR. The screening will be followed by a special Q&A with the filmmaker.