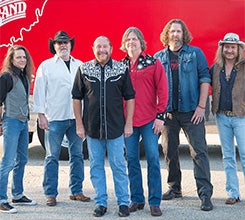 The Marshall Tucker Band got its start in Spartanburg, SC. With 40 years in the business, the band has recorded 22 studio albums (seven of which went gold and three went platinum), three DVDs, three live albums, and many compilations. Their music continues to be played on classic rock and country radio with hit singles like "Heard It in a Love Song," "Fire on the Mountain," "Can't You See," and "Take the Highway."   Throughout the years, The Marshall Tucker Band has wowed critics and influenced major country acts like Alabama, The Kentucky Headhunters, Confederate Railroad, and Travis Tritt with its definitive blend of rock, R&B, jazz, country, and gospel. Their music has also been featured on the soundtracks of movies such as Smokey and the Bandit, Blow, The Pursuit of D.B. Cooper, Shipwrecked, Crank 2, Don’t Mess with Zohan,Stop Loss, Swing Vote, and Taking Chance.   CMT named their song “Can’t You See” the #4 Greatest Southern Rock Song. Their debut album, The Marshall Tucker Band, reigns as Gibson Guitar’s #5 Greatest Southern Rock Album. And in 2013, GRAMMY Magazine named the group's logo as one of the most distinctive and iconic brands in music.