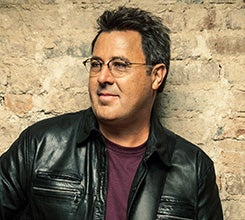 One of the most popular and most recorded singers of the past quarter-century, superstar Vince Gill has become the measure of excellence in country music.   Gill achieved his big breakthrough in 1990 with “When I Call Your Name,” which won both the Country Music Association’s Single and Song of the Year awards as well as a Grammy® Award. He has won 21 Grammys – the most of any male country artist – and 18 CMA Awards, including Song of the Year four times – making him the most awarded artist in that category in CMA history.   Gill was inducted into the Country Music Hall of Fame in 2007 and is a member of the Grand Ole Opry. In 2012, he was honored with a star on the Hollywood Walk of Fame. He is member of the six-time Grammy-winning band The Time Jumper and has made guest appearances on more than 500 albums, including on those by Barbra Streisand, Eric Clapton, Willie Nelson, Dolly Parton, and George Jones.   Combining a deep knowledge of Americana, bluegrass, and classic country with the fire of 1960s rock, Gill has established himself as one of the most successful artists of his generation.