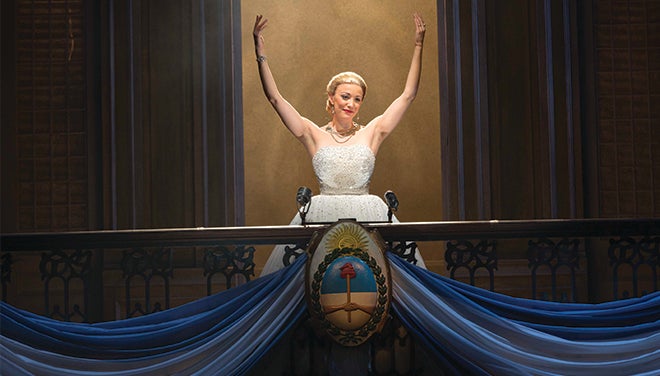 EVITA: The Language of Dance

Their re-envisioned "Evita" arrives at the Peace Center on June 24 for eight performances through June 29.

The sets of this national tour production are inspired by Argentine architecture. Lloyd Webber's score has been reorchestrated to give it a more Latin flavor.

And the production features more dance than ever before, especially the tango.

"We have a lot of tango," said Caroline Bowman, who stars in the show as Eva Peron. "The tango is very prevalent in Argentina. It's sort of a language in itself, which we use to tell the story."

The Tony Award-winning 1979 musical, of course, features all the familiar songs that made the show a Broadway blockbuster: "High Flying, Adored," "Another Suitcase in Another Hall" and, of course, "Don't Cry for Me Argentina."

The show, with lyrics by Tim Rice, tells of how Eva Peron used her beauty and charisma to rise from the slums of Argentina to the presidential mansion as first lady. She became a champion for the poor and one of the most powerful women in the world. Her fragile health, however, would bring her reign to an end.

"She was so controversial," Bowman said about the real Eva Peron. "But what I love about her was that she was one of the great feminists of our time. I admire her power and her strength for going for what she wanted in life and not letting anyone or anything stop her.

"I think that's a very admirable trait. Whether or not I agree with the way she handled situations, I did appreciate her as a woman."

Bowman had just come off the Broadway production of Cyndi Lauper's "Kinky Boots" when she was asked to star in the national tour of "Evita," which began rehearsals last July. The tour continues through October with final performances at Washington D.C.'s Kennedy Center.

"It's a dream come true," Bowman said by phone from a tour stop in Atlanta. "It's an iconic character in musical theater and an iconic woman in history."

In the past year, as she has performed the role six times a week (another actress takes on the role two times a week), Bowman said her characterization has deepened.

"I make discoveries on a daily basis," Bowman said. "I think I connect with Eva more and more. I've found more complexity, more colors to the character, more strength and more vulnerability."

The role of Eva also is among Broadway's most challenging for a leading lady.

"It's a 24-hour-a-day job," Bowman said. "I wake up in the morning and see how I feel. And I think about what I need to do to get myself and my voice into shape for the performance."

The national tour is based on the 2006 revival in London and hte 2012 Broadway revival. It includes "You Must Love Me," a song written by Lloyd Webber for the 1996 film of "Evita" which starred Madonna.