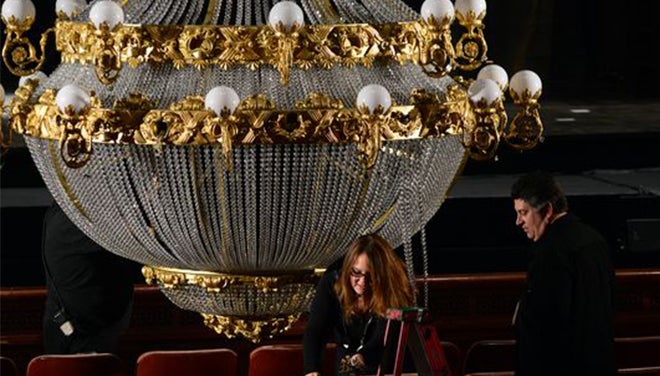 The national touring production of "The Phantom of the Opera" at the Peace Center is enjoying brisk ticket sales, Peace Center officials said Thursday during a backstage tour for the press.

Performances this weekend are almost sold out. The best seats for this new staging of Andrew Lloyd Webber's 1986 musical are available on weekdays and next weekend.

The new "Phantom" production by British director Laurence Connor has been selling well throughout its open-ended tour that began in October and continues through at least 2015, said stage manager Heather Chockley.

The show features a 37-member cast and 20 crew members as well as 100 others who are hired locally to assist with sets, wigs, props, costumes, makeup, and other technical elements of the huge production.

It takes 21 tractor-trailers to transport the lavish sets and costumes to each city. It also takes two full days to recreate the set at each tour stop.

"It's a huge show, one of the largest on the road," Chockley said.

Lloyd Webber's Tony Award-winning musical, about the disfigured man who haunts an opera house and his love for the young singer Christine, is the longest running production in Broadway history.

"Our director really wanted to emphasize the more human elements of the show." Chockley said.

One of the show's iconic elements - the chandelier that (spoiler alert!) comes crashing down at the end of Act I - has been completely refurbished by the acclaimed lighting designer Howard Eaton.

Because of the size of the production, this "Phantom" tour only travels to cities that commit to a minimum of two weeks of performances, Chockely said.